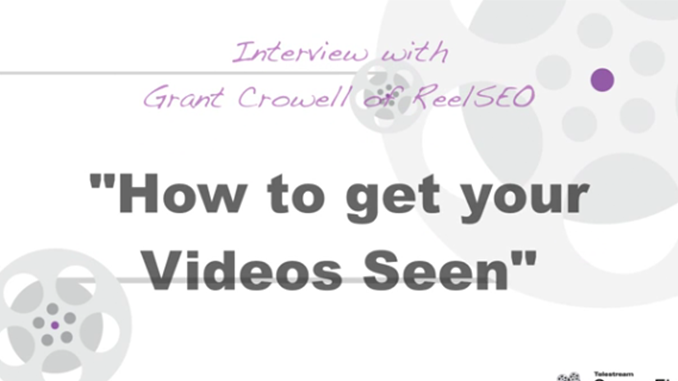 I had the fortunate opportunity to interview online marketing guru Grant Crowell, who is a regular contributor for ReelSEO, the online video marketing guide.

Grant has oodles of experience with online marketing and online video. In fact, soon after our conversation, he presented a piece at  the Mediabistro Social Media Optimization Conference, entitled “Social Video Optimization: Real opportunities, Success Stories, and Winning Strategies“.

So I was thrilled to get a chance to talk to him and ask him to give us some tips on marketing online videos… how to get our ScreenFlow videos seen.

The video is just over 14 minutes long, but there are some interesting tips that are worth the time.

Here are a few things he suggests:

This is just a small sampling…. Surprisingly, despite having SEO in the Web site’s name (ReelSEO), none of his primary tips have anything to do with Search Engine Optimization (SEO)!

Enjoy the interview, and thank you to Grant.

For anyone interested in how I created this interview, I’ve included some information, as well as some notes and observations:

1) I used Ryan Bollerbach’s method of recording Skype Interviews. I called Grant using Skype with video enabled. Then I disabled own web cam from Skype (so Grant couldn’t actually see me during the interview, but I could see him), and started recording with ScreenFlow. The ScreenFlow captured the Skype screen showing Grant, Grant’s audio, which was coming from my computer, my own web cam which was recording me, and my audio coming from our Blue Yeti external microphone.

2) I lit up my area with some Fancier LED500 upright lights we have sitting in our studio . We are in the process of getting our studio set up, so for lighting I had to improvise with what we had. The lights were a little harsh, making me look washed out and overexposed, but I was able to touch that up in post production.

3) After the interview, I opened the ScreenFlow recording and spent about 6 hours in post production. Most of that time was spent adding text (with video actions & transitions) to accompany Grant’s talking points, but I also spent some time adjusting the saturation and contrast of my own web cam captures (using the tools in the Video Action properties panel), developing a background image, and adding an intro/outro.

1) Firstly, next time I will make sure I have a wired connection to the internet during the interview. I had only a wireless connections, and there were a few times the image cut out on me.

2) As an interviewer I still have a lot to improve on 🙂 Next time, I would be more concise with my questions. I would also make sure I include occasional pauses in the audio which would have made it oh-so-much easier to edit out portions of the video and audio.

3) Speaking of editing, it’s also a good idea when doing a recorded interview like this, to ask your interviewee to do a couple of takes for each talking point. Since we’re not broadcasting this live, we have the opportunity to edit the best takes in post-production. I would have asked for some shorter takes of certain sections, and expanded on other sections more. This would have also allowed me to have better control over the overall time of my video. (Luckily our YouTube channel allows for 15 minute videos.)

4) I used the beta version of ScreenFlow 3.0 to edit this…and oh…it was NICE! I can’t wait until we can unleash this version…. (and before you ask, no I can’t tell you a release date. All I can say is it’s coming soon 🙂

I’d love to hear your feedback, and also your own tips for recording video interviews.